Eastsound Village Playground on the Green

Project update as of 7/2/2020: Playground-on-the-Green Set for September Opening.

On June 29, islanders Charlie Nigretto and his son Tyler, operating two huge excavators, lifted the equally huge “Pork Chop Rock” to its permanent location atop one of three rock “islands” at the Playground-on the-Green, currently under construction by local landscape artist, Chuck Greening. The islander who donated the funds to purchase the rock, wishing to remain anonymous, dedicates “Pork Chop Rock” to the power of volunteerism for positive impact in the community.

The Playground-on-the-Green is a wonderful example of volunteer energy, from its inception at Eastsound Visioning meetings, to its funding by islanders through OICF’s Give Orcas; an OICF Legacy grant in honor of Ginny Lu Woods; an OIFC donation of landscape trees in celebration of its 25th anniversary; a generous donation for benches from Island Market; and a Lodging Tax Grant from San Juan County.

Mark Mayer is donating his time as project manager. Other members of the Playground Team, including Chuck Greening; architect David Kau; artist/blacksmith Zackarya Leck; Rock Island SVP for Sales, Marketing and Support, Dan Burke; and SJC Parks Commissioner, Margaret Payne, have donated countless hours to planning, fundraising, and execution of the project. It is worth noting that more than fifteen years ago, Chuck and David were also instrumental in the design and building of the Stage-on-the-Green, which design the Playground seeks to complement. Ken Katz was a founding member of the team.

Boulders for the rock “islands” were donated by Camp Orkila, climbing logs by Moran State Park, after the big blowdown of Feb. 2019. Fabrication and storage of the logs was completed with the help of Ben Nunez and the Helsell family at West Sound Lumber. The heritage willow tree was pruned by Rain Shadow Consulting. Island Excavating, along with Todd Shaner and Nate Averna, helped move rocks, logs, and gravel. Bathan Shaner re-sited the gravel road on the Green. Paul Kamin, of Eastsound Water, will install the water fountain. Chuck’s wife Marguerite helped select the landscape trees, which delivery was donated by Orcas Freight. Chuck’s son, Axel Greening, has been Chuck’s right-hand man on site. Mark Padbury found “Pork Chop Rock.” Clyde Duke stored boulders on his nearby property. Orcas Recycling/Exchange donated dumping and materials. Kenmore Air and Kangaroo House donated flights and housing for the playground designer, Ben Johnson, from Greenworks Landscape Architecture, which specializes in nature-based playgrounds.

Celebrating two years of planning, fundraising, and execution, the Playground-on-the-Green will open for kids in September. “Finishing Touches” still needing funding are a custom slide designed and fabricated by Zackarya Leck; a ship’s net ladder and rope climb; boundary fencing and interpretive signage. See the video about the Playground-on-the-Green, donated by island videographers, Erin and Emily Bennett, at https://eastsoundgreenplayground.com, and donate yourself at the San Juan County Parks website, https://www.sanjuanco.com/430/Parks-Recreation-Fair. Click the blue “Donate Now!” box near the top of the page. Thanks for your support for kids! 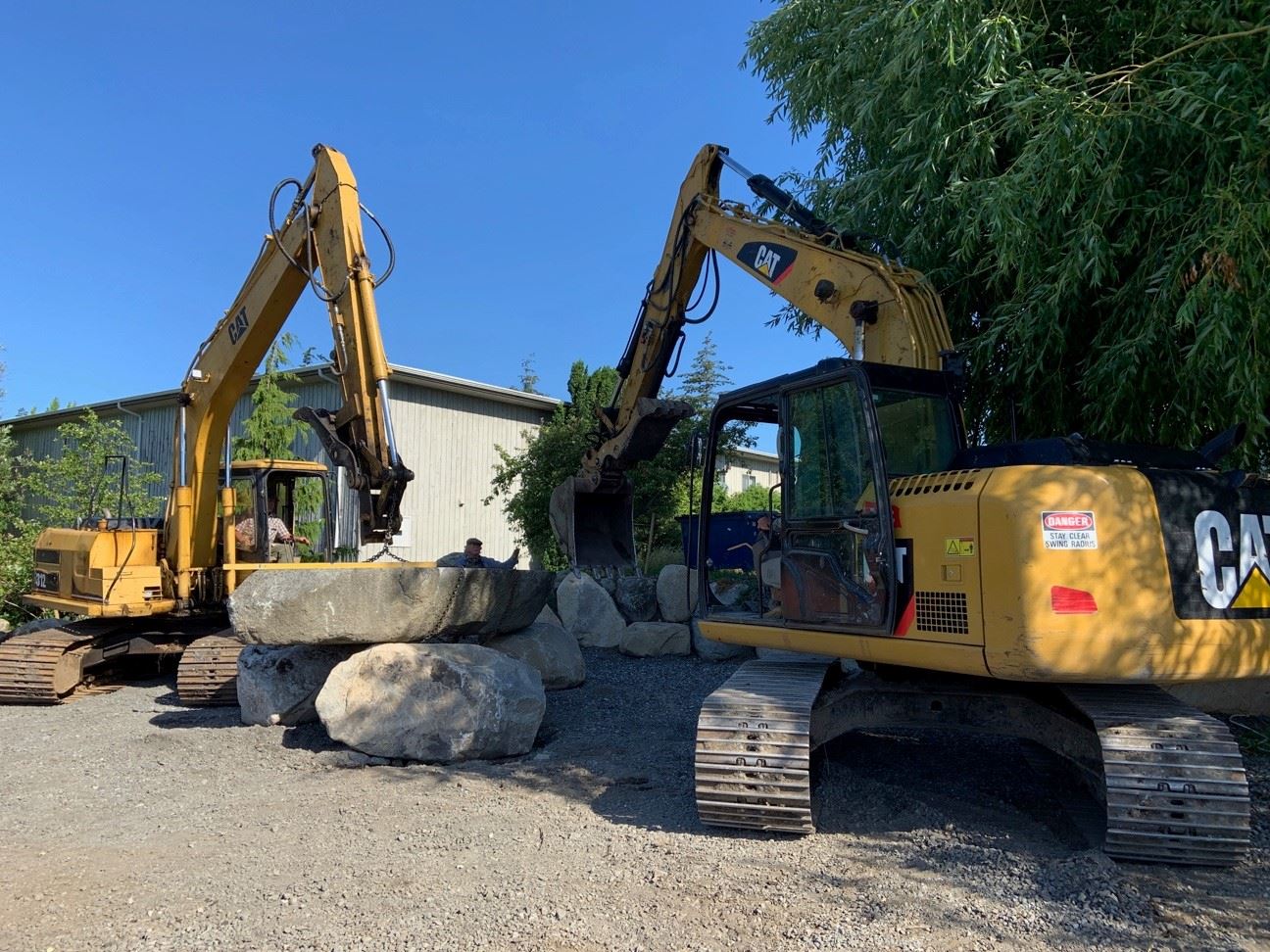 Understandably, due to the COVID-19 outbreak, construction is on hold until workers can safely return to work. We are grateful for your ongoing support of this project. We hope that all community members are taking care and staying healthy! 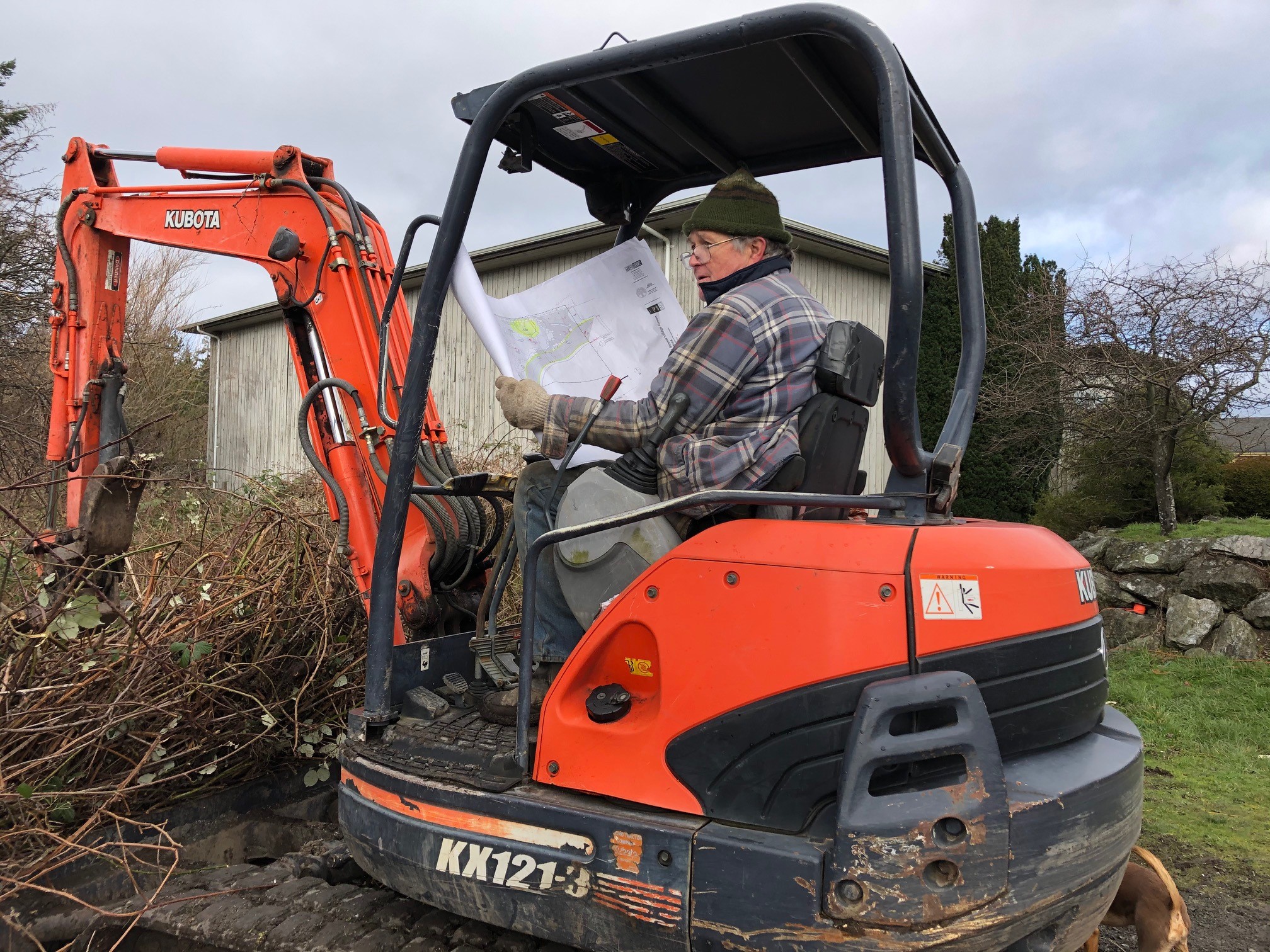 Update February 2020:
Construction work has begun!
Greening and Greening, LLC. breaks ground for the new Eastsound Village Green Playground on February 12, 2020. Many people are contributing to this community-based plan to bring a nature-based play area to the heart of Eastsound.
photo by Margaret Payne, Orcas Island

You can still help make this play area a reality in Eastsound!

Fundraising continues to develop this unique and innovative nature playscape in the heart of the Village. Additional donations are needed to fully fund the Playground-on-the-Green, a nature-based playground for island and visiting children in the northwest corner of the Eastsound Village Green. Who could resist helping us acquire these WISH LIST items? Or, make a general donation to help us complete work on the playground - we'll take any amount, large or small!

Donations may be made to San Juan County Parks (call 360-378-8420 to give by credit card or mail checks to SJC Parks, 350 Court Street #8, Friday Harbor WA  98250). These gifts are tax deductible in accordance with IRS tax regulations. Thank you to all who showed financial support by donating through giveorcas.org during their 2019 campaign and to those donors who have shown their generosity throughout this fundraising effort!

Construction has begun! The design is complete; permits are submitted; the rocks and logs have been collected and prepared for installation; steel support brackets are fabricated. $55,000 of the funding was secured through a Lodging Tax Grant and the community has kicked in another $40,000.

Thanks to YMCA Camp Orkila for parting with those special glacial erratic boulders that you had been collecting for years! They will be a mainstay of this new kids' playground. The rocks were moved to Eastsound Village Green on March 12.